Two of the greatest jazz guitarists in the world, Martin Taylor & Ulf Wakenius, have joined forces for an unforgettable live show. They bring with them a unique legacy in European jazz from years of touring and recording with Stephane Grappelli and Oscar Peterson. Martin Taylor worked with Stephane Grappelli for 11-years, filling the guitar chair for Django Reinhardt while Ulf Wakenius worked with Oscar Peterson for 10-years, filling the guitar chair for Joe Pass, Herb Ellis and Barney Kessel. In addition to that Taylor and Wakenius have also collaborated with greats including Pat Metheny, Herbie Hancock, Jeff Beck, George Harrison, Mike Brecker, Jamie Cullum, Ray Brown and Michel Legrand to name just a few.

“Martin Taylor is one the most awesome solo guitars players in the history of the instrument!”

“He out-shreds all of us put together… I´ve never seen anything like it.”

“Ulf Wakenius is one of the greatest guitar players in the world today!” 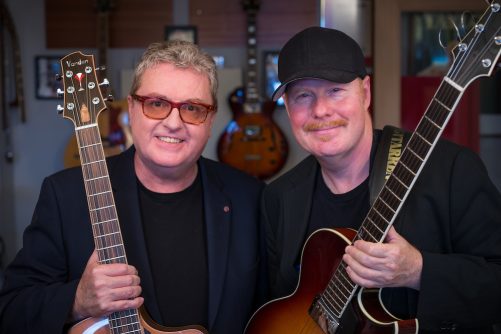