FREE CD WITH A PAIR OF TICKETS!

TICKETS ON SALE 9AM 20TH MARCH.

Edward II are an English roots band that uniquely blend the rhythms of the Caribbean with traditional songs from the British Isles. Back in the nineties the band was signed to Cooking Vinyl Records and Rhythm Safari in the US, and worked extensively across the globe touring world music, reggae and folk festivals on almost every continent before finally calling it a day in 1999.

Despite the constant touring the band always remained close friends and, in 2016, came back together to record and perform a new repertoire of songs born of the Industrial Revolution (specifically of their home town Manchester) known as the Manchester Broadsides, and released a brand new CD called ‘Manchester’s Improving Daily’. The album received a plethora of positive reviews, including Four Stars in both Mojo magazine and The Guardian.

Now we welcome Edward II back to the Band on the Wall stage to play work from their new LP ‘Dancing Tunes’.

Dancing Tunes is a collection of melodies and airs that were collected from the fields of Jamaica (by landowner Walter Jekyll) at the start of the last century and later immortalised by the Jamaican poet, folklorist, writer, and educator Louise Bennett-Coverley (more commonly known as Miss Lou), who originally recorded many of the songs in the 1960s. Now Edward II have breathed a new life into these important historical verses.

Of course, with ‘Dancing Tunes’, the band have imparted their own unique take on the songs, re-interpreting, blending and referencing some of the English tunes which no doubt added to the original mix. Working alongside dub producer Paul ‘Lush’ Morris of Nucleus Roots, on this album Edward II have purposely recreated a British urban dub sound, using drum machines and beats intertwined with the live performances and instrumentation that has always been part of the bands unique style. 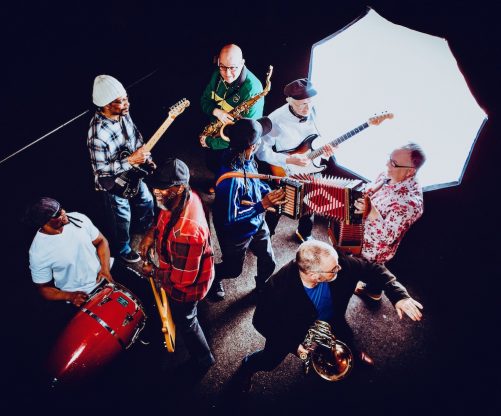