Damir Imamović is the “king of sevdah music” from Sarajevo, and we proudly bring him to the Band on the Wall stage.

Although he showed interest in music since childhood, he devoted himself to it only after studying philosophy. In 2004 he worked with Farah Tahirbegović on a monography of his grandfather – and one of the most influential sevdah singers, Zaim Imamović. That book introduced him to the world of sevdah and the world of professional music. Soon he started developing his own repertoire while performing in Bosnia and abroad. Important among first performances are a concert at the Turkish cultural centre in Sarajevo (March 2005), a performance at the Center Pompidou in Paris (2005), recording with Vlatko Stefanovski for the compillation ‘Bentbaša – Bosnian Love Song’ (Goethe/Yaman, 2008), as well as a series of Sevdah Ripablik concerts in Sarajevo’s Karabit.

In 2006 he put together the Damir Imamović Trio with Vanja Radoja on violin and Edvin Hadžić on double bass, with which he recorded ‘DI3 Plays Standards’. After a series of successful performances in Bosnia and around the world, DI3 recorded their first live CD at Youth Cultural Center Abrašević in Mostar, in November 2007. ‘Abrašević Live’ soon became one of the most listened to CDs of the new sevdah movement in former Yugoslavia, and brought DI3 numerous performances at venues such as CRR in Istanbul, Sarajevo’s BKC, and Dom Omladine in Belgrade.

In 2015 Damir opened a multimedia exhibition of sevdah music in Sarajevo. Soon after that his book ‘Sevdah’ was released (Vrijeme, 2016) and has was translated into English in 2017. It is the first book on this traditional genre.

In addition to performance and research, Damir has actively pursued theatre work. He has been internationally awarded for music in theatre and worked with Dino Mustafić, Selma Spahić, Aleš Kurt and Stevan Bodroža. He also wrote music for the film ‘Sarajevo’ by Mustafa Mustafić and an animated film ‘Aždaja’ (The Dragon) by Ivan Ramadan.

Damir is a recipient of the Grgo Martić Award for promotion of Bosnian music in 2015 (awarded by AMUS, the society of authors in BIH).

“A true revolutionary of the genre!” www.sevdalinkas.com
“The king of sevdah music!” www.huffingtonpost.com
“…a new take on Balkan blues!” Guardian
“The new direction in Bosnian sevdah!” fRoots
“Not only a new sevdah singer – a new sevdalinka was born with Damir” Svetlana Slapšak, Peščanik
“Damir Imamović is a new, yet original sevdah voice of today!” Dragan Kremer, Vreme 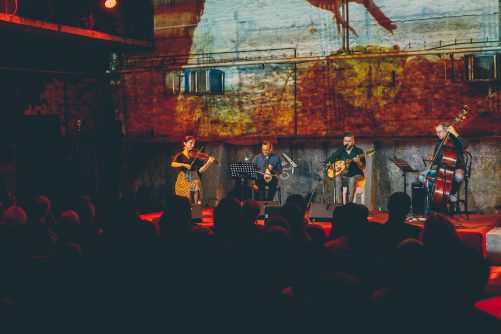