For 10 years there had been rumours of BRAND X reuniting, then in late 2016, it happened. Founding members Percy Jones (Bass) and John Goodsall (Guitar) with Drummer Kenwood Dennard pulled it off – and there was much rejoicing. Completing the band were American Keyboard whiz Chris Clark & Percussionist Scott Weinberger. Fast Forward to 2019: With rave reviews in The Huffington Post, Progression Mag, New York Times, Innerviews, PROG, and jaw-dropping performances headlining Ros-Fest, ProgtoberFest, ProgStock and three superb “Cruise To The Edge” performances have led many to claim this: “Best live BRAND X ever!”

Since reuniting, BRAND X have been mostly focused on shows in the U.S. with a few international shows. Now in April 2020, they launch a multi-city tour in England – first time back in decades. John Goodsall remains a land-lover firmly ensconced in MC-ing a variety of Midget Tossing tournaments and Grammar Rodeos in the US, so for shows exclusively outside the states Brand X enlist Austrian guitarist Alex Machacek. He’s the guy that John Wetton and Eddie Jobson hand-picked to replace Allan Holdsworth in UK. Not too shabby.

The Buzz: Some people said some very nice things!

Our favourite is from a fan in New Jersey right after a show: “I’ve been playing drums for 30 years now, but after seeing this guy in Brand X, I’m going home to burn my kit – right now!” 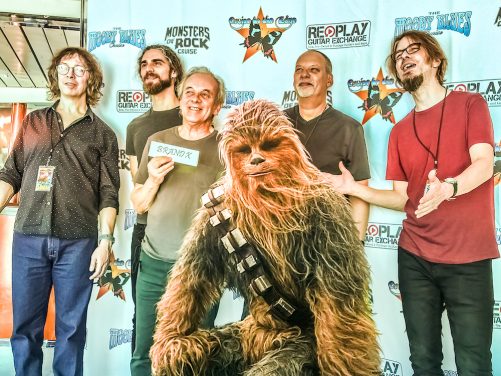