The Big Town Playboys have released a series of studio albums, as well as a collaborative project with Jeff Beck (entitled Crazy Legs), re-creating the songs of Gene Vincent. Several of their songs also appeared on the soundtrack of the film, The Pope Must Die. They have performed as a backing band for Robert Plant, who contributed guest vocals on their album Roll the Dice They also performed together at the Birmingham Heart Beat 86 charity concert. Eric Clapton has expressed admiration for their work, arranging for them to open for him during his two-week-long stint at the Royal Albert Hall in London in 1996.

Mike Sanchez left the band at the end of 1999 to pursue a solo career. Presently, Ian Jennings is the only remaining original member of the band. After Sanchez’s departure, the Big Town Playboys were fronted by another local London artist, Big Joe Louis, of "Big Joe Louis and his Blues Kings."

In May 2005, the band teamed up with Gary Brooker and Andy Fairweather Low to give a charity concert called "Aftershock" in India, with all proceeds to benefit victims of the tsunami caused by the 2004 Indian Ocean earthquake." British bands in fundraising drive]", [[The Hindu], published 7 May 2005, accessed 5 May 2007.

This article uses material from the Wikipedia article “Big Town Playboys”, which is released under the Creative Commons Attribution-Share-Alike License 3.0. 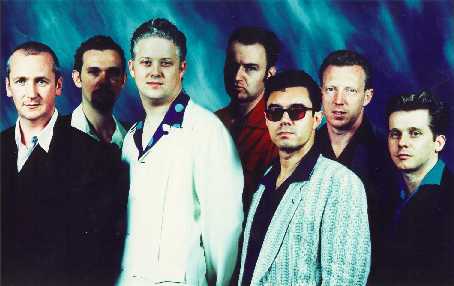