Talmage Holt Farlow (June 7, 1921 &ndash; July 25, 1998) was an American jazz guitarist. Nicknamed the “Octopus” for his extremely large hands which spread over the fretboard as if they were tentacles, he is considered one of the all-time great jazz guitarists. Where other similar players of his day combined rhythmic chords with linear melodies, Farlow preferred placing single notes together in clusters, varying between harmonically enriched tones based on a startling new technique.

This article uses material from the Wikipedia article “Tal Farlow”, which is released under the Creative Commons Attribution-Share-Alike License 3.0. 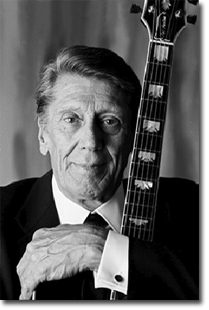