Rockin’ Roots and Rhythm – T & Latouche bring a unique and fresh reggae sound to venues across the UK! Featuring T Carthy and Glen Latouche of the original reggae folk fusion band Edward II, T&Latouche combine pumping basslines and driving rhythms with strong melody, sweet harmony, bubbling guitars and blistering brass hooks. Appearing with an all live six piece band and performing a mixture of originals from their forthcoming debut album and classic reggae tracks by the likes of Dennis Brown, Bob Marley and Maxi Priest, these two legends of the live music circuit are returning to their roots in style!

The two charismatic former front men (T Carthy and Glen Latouche) of the original reggae folk fusion band Edward II bring their latest project to venues across the UK.   Having entertained audiences in all four corners of the globe, guaranteeing spontaneous dancing everywhere from Bombay to San Francisco, they are experts in pulling a crowd to their feet and keeping them there.

After Edward II split in November ’99, Alton Zebby (Edward II’s charismatic drummer) emigrated to Ethiopia as part of the pre-millennium Rastafarian exodus and has remained there to this day.   Although Glen went to Africa for a short time he returned to the UK inspired and refreshed with a renewed desire to perform and after initial rehearsals formed ‘T&Latouche’

‘Keeping it live’ – T & Latouche is a six piece band also featuring Gavin Sharp (Sax & Keys) and John Hart (Guitar and Trombone) both formerly of the classic Edward II line-up and have developed a roots sound tied together by strong melody, sweet harmony, bubbling guitar and blistering brass hooks. Performing a mixture of originals from their forthcoming debut album and classic reggae tracks by the likes of Dennis Brown, Bob Marley and Maxi Priest, these two legends of the live music circuit are returning to their roots in style!

Tales from an Urban Safari – Debut CD from T & Latouche

More subtle than most modern R&B influenced reggae T&Latouche stayed true to their roots creating a ‘live’ sound in the studio far more akin to recordings created by Jamaica’s instrumental heroes such as Ernest Ranglin and Dean Fraser as well as much of the original roots and lovers standards from the Studio 1, Trojan and Tuff Gong catalogue.

With a band whose personnel is as widely travelled as T&Latouche, other influences inevitably fuse into the mix which coalesces with flavours of afrobeat, calypso, soul and jazz , over which Glen scored beautifully simple melodies supported by rich and resonant vocal harmonies taken from gospel .

The real key to Urban Safari ?

Derived almost entirely from real life stories, Tales from an Urban Safari is an account of the reality of urban life for the majority of people living in the under-developed heartlands of British cities at the beginning of the 21st Century.

“Tales of a Urban Safari is exactly that, stories told by people who have lived and worked in the heartlands all of their lives… Refreshingly upbeat English roots reggae at its finest…” Mark Radcliffe

“We had the guys play at the Big Top Bar in Piccadilly Gardens Manchester in December 2010. They had people coming in off the street when they saw the great atmosphere inside. We had a really good customer feedback on the band and would certainly invite them to play at future events…” KRO Catering Ltd 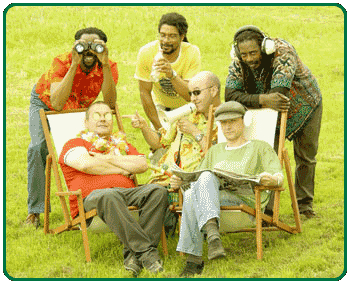