Adrian Edmondson was a teenager when punk arrived. The songs of The Sex Pistols, The Clash, The Jam and The Stranglers were the soundtrack to his life through the late 70’s and early 80’s, and like a lot of people of his generation he was fond of playing these songs to himself at home on his acoustic guitar.

Cut forward to 2007: after a boozy pre-Christmas lunch in Soho, Ade stumbled along to Denmark Street, home of many alluring musical instrument shops, and whilst inebriated, ‘accidentally’ bought a mandolin. Surprised to see it sitting there in his kitchen the following morning he nevertheless picked it up, worked out a few chords, and started playing the same songs with a mandolin accompaniment – it sounded really interesting.

He was touring with the Bonzos at the time and he brought his mandolin along, and with Neil Innes on acoustic guitar, they had a go at London Calling in the dressing room. It sounded good, but Neil said ‘What you need are some brilliant folk musicians.’
Ade got in touch with Troy and Maart and they were both immediately up for it. As soon as he explained the idea to Troy: ‘Punk era classics with Celtic folk arrangements.’ Troy replied ‘Why not The Model by Krafwerk as well? I’ve always wanted to play that on the pipes.’

They met for a couple of days to mess about with the idea. If it didn’t work they could all just walk away. But within the first hour they knew they were onto something. In the two days they drank numerous beers, ate 2 curries and arranged 8 songs – and the band was born.

Rehearsals followed, and then, bizarrely, a trip to St Lucia to test it out (off season, cheap flights, cheap hotels, anonymity). They threw themselves in at the deep end and did 6 gigs in 6 days. Just little bars. But it got them up and running.

Back in England they toured through Nov/Dec 2008 to packed houses, and both they and the audiences had a brilliant time. 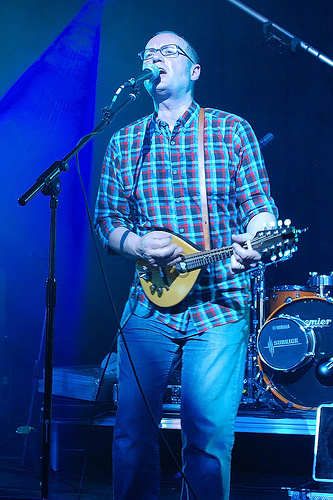