Pet Shop Boys, Passenger, KT Tunstall and Russell Watson Announced for Passport: Back to Our Roots

Following the successful fundraising campaigns for Elbow, Everything Everything, Public Service Broadcasting, The Slow Readers Club and Ash, we’re excited to announce the next lineup for Passport: Back to Our Roots, the campaign to raise money for independent grassroots music venues at risk of closure due to the COVID-19 crisis:

Entry to these shows is via prize draw. The Crowdfunder campaign opens at 10am Monday 14th September and will run for three weeks. For a £5 minimum donation to the campaign, you’ll be entered into the draw to win entry to the show of your choice for yourself and a friend. So set your alarms!

We’ll be announcing more shows across the country. The next ‘block’ of gigs will be announced when the two campaign for these shows closes. 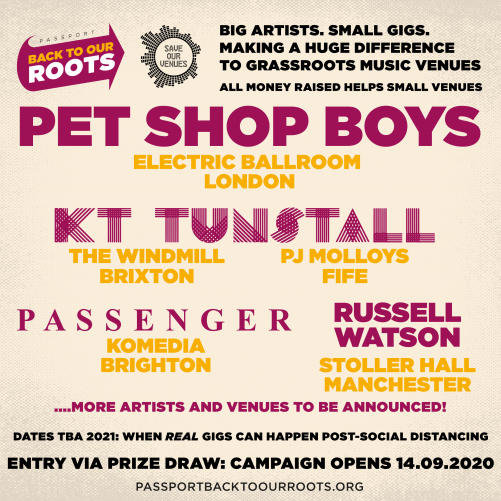